Every ‘foreigner’ from outside of the EU has to follow a compulsory civic integration course. That also applies for invited refugees. 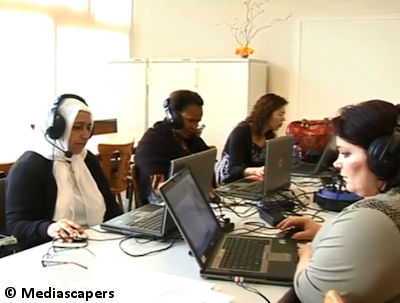 Before their arrival invited refugees have already been prepared for life in the Netherlands. In the refugee camp they get a cultural orientation training of six half-day sessions, during which they are introduced to Dutch standards and values.
Once they have arrived in the Netherlands, they will go to their new house within 48 hours and the actual integration starts. They can apply for a civic integration course. They are obliged to finish this course within three years. That means that they will have a reasonable grasp on the Dutch language and that they will have some knowledge of Dutch society.

Their integration is concluded with a civic integration exam. Refugees have to pay for the course (about € 3000,-) and the exam (€ 350,-) themselves. Refugees who do not have enough money can get a loan from DUO (Education Executive Agency).
To prepare the invited refugees for their arrival in the Netherlands, Jotja Bessems has made a film commissioned by the Central Agency for the Reception of Asylum Seekers. The emphasis lies on every day activities, such as going to school, shopping for groceries, and travelling by public transport. In the fragment below we will go into shopping and working.