The Netherlands is part of a group of about 20 countries who have joined the worldwide resettlement programme of the UNHCR. Every country establishes a quota with the number of refugees that are being invited to come to this country. Over the past few years the Netherlands has established various quotas. Until 1980 there were 750 refugees coming to the Netherlands on invitation, nowadays there are approximately 500. Until 1999 this was an annual quota, since then it is 1500 in three years time. A division could be: 750 (year 1) – 450 (year 2) – 300 (year 3). As long as the number does not exceed 1500 in three years time. 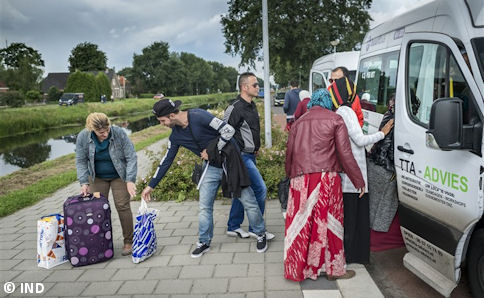 How does the procedure work?
The UNHCR chooses refugees. Four times a year a Dutch delegation (employees of IND, COA and the ministry of Foreign Affairs) visits one of the refugee camps. The refugees that are chosen by UNHCR are interviewed by the IND. The IND decides who can come to the Netherlands, and who cannot.

The COA arranges that the chosen refugees can follow a course before they come to the Netherlands, which includes information about the Netherlands and the Dutch values and standards. Besides that, they already learn the basic principles of the Dutch language when they are still in the camp.

The employee of the Ministry of Foreign Affairs takes care of the registration of the personal data of the refugees and provides visas.

In the past invited refugees went to a reception centre first, and waited there for their own house. Nowadays the housing has been arranged before they arrive, and they can go and live in their house within two days.
There are usually six months between the selection in the camp and arriving in the Netherlands.

A mission member: “It is fantastic to see how happy people are when they get to hear that they can go to the Netherlands from a miserable refugee camp, to build a new future there.”

Questions
6) Do you think it is right that refugees who are invited by the Netherlands have to be prepared to learn the Dutch language and embrace the Dutch values and standards? Explain your answer.
7) Do you know why since 2011 invited refugees do not have to go to a reception centre first before they definitely get access to a house?
8) Do you know why an invited refugee is offered an individual action plan?