A more appropriate name is hardly thinkable: ‘Liberty’, meaning ‘Freedom’.
She was born in Burma and a member of an ethnic minority. Her entire family had to flee from Burma and lived in Mae La for years, the biggest refugee camp in Thailand. Her situation seemed hopeless. Until she was invited to come to the Netherlands, together with her sister and parents.

“We lived in a bamboo hut, in the Burmese refugee camp Mae La in Thailand. I was always dreaming of a better life. Somehow I knew that I would never leave the camp. The day that I heard that we could come to the Netherlands, I will never forget. I was so incredibly happy.”

She does worry about her friends in the camp.
“My past will haunt me forever. A lot of my friends still live in the camp and will probably never leave it. I worry about them. And even though my direct family is safe now, we are not complete yet, as my brother has fled to America and he cannot come to the Netherlands.”
In the refugee camp she could not study. In the Netherlands she can.

“In the future I want to study medicine and become a doctor. This is only possible if my Dutch is good enough. That is why I take classes at the university, besides my compulsory Dutch lessons for my civic integration course. I also do voluntary work for two days a week. My head is overflowing with Dutch words.” 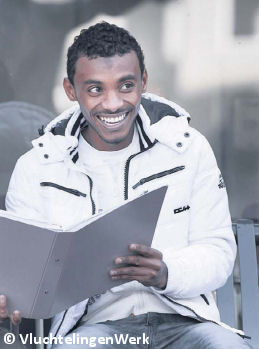 Hashim: With the help of an interpreter Hashim tells about his flight from Eritrea.

“A brother of mine, Ali, was called up for military service. We never saw him again. We don’t know where he is. That is why I was afraid to do military service. Nine of us in fled. By boat, as we lived on the coast. When we arrived in Yemen we were arrested, and we spent a year a half in prison. Returning to Eritrea is no option. The risk of being killed there is too great.”

UNHCR heard about the difficult situation of the still young Eritrean refugees, and took care of them. Eventually the Eritrean people ended up in a refugee camp in Rumania, where they were prepared for resettlement in the Netherlands.

The two Eritreans are thankful for the reception in their new home country. Their parents have stayed behind. There is no chance of a family reunion, Ingrid Bogers of the Refugee Council states.
“We see that these kind of refugees are often incredibly thankful. Here they can walk on the streets without having to fear if they will still be alive tomorrow. They are also trying hard to make a new start. Imagine, a boy of 19 who has been in prison for a year and a half, who has to fear for his life if he would have to go back to his country”, Chris Baltussen states.

Questions
2) Where in the Netherlands are the invited refugees going to live?
3) Why do the employees of the Refugee Council think it is important that the invited refugees will be supported?
4) What does the ‘famous blue file’ contain in the film?
5) Why is there no chance for Hashim to reunite with his family?