Step 4: The Influence of slavery on the present

Enslaved people who were stolen from their home country were brought to an unfamiliar world of violence and hardship. Generations later, the descendants of African slaves still feel robbed of their ‘roots’. Many of them have never even visited the country of their ancestors. African cultures lived on through stories, religious rituals, music, and food. These things offered some support to the slaves in the struggles of their daily lives.

After a while, communities grew out of groups of slaves who shared a language, religion, or country of origin. Some cultural developments came out of these communities: candomblé and capoeira in Brazil, the Gullah culture on the east coast of the United States, and voodoo in Haiti, the Dominican Republic, Cuba, and Louisiana. African cultures and the history of slavery had an important influence on the developments of the states on the American continent. We will look at two examples of cultural developments during the time of slavery that are still important today: voodoo and capoeira.

Voodoo
Voodoo (also called vudon, vodon, vodoun, vodou, or voudou) is something many people only know from old horror movies from Hollywood in the 1930s. This is not an accurate representation of real voodoo.

Slaves from West African, who were part of ethnic groups like the Mina, Ewe, or Fon brought their religion vudon with them to the New World. It was forbidden to practice African religions in the catholic colonies of the New World, but vudon or voodoo was still secretly practiced by slaves in various places. For example, vudon spirits were represented as catholic saints to hide their real identity. This gave slaves an invisible way to resist white oppression. 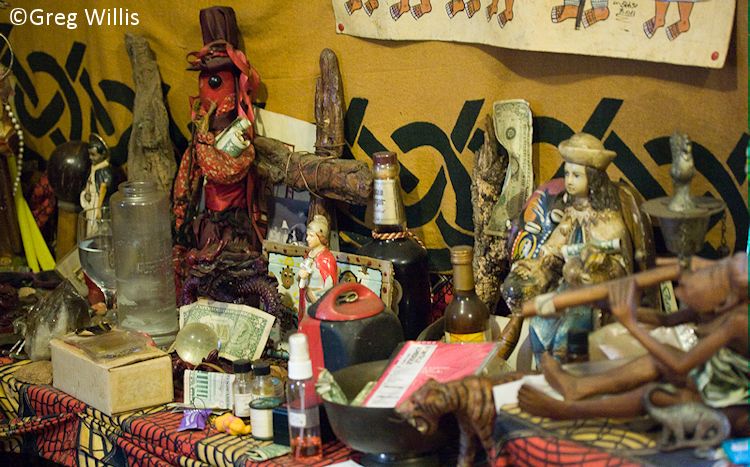 A voodoo altar with a small catholic saint statue on the far left. Next to it are a red voodoo doll, money, liquor, a cigar
(symbol for life), and a cross (symbol for death).

After a while, elements from voodoo and Christianity blended together. It was a different blend in different places, so it did not look the same in Haiti, Brazil, the Dominican Republic, Cuba, and Louisiana. According to the leader of Haitian voodoo, the religion is about gaining knowledge about life. The practices and rituals are mainly aimed at healing and overcoming everyday issues. However, knowledge of death may be the most important part of voodoo, because it would help people lose their fear of death. Voodoo is still practiced by the majority of Haitians to this day, even though 80% of the population is catholic. Voodoo and Catholicism are united without conflict.

Capoeira
The life of a slave was marked by violence. Groups of slaves frequently rose up to try to free themselves. They were violently struck down by armed supervisors, but some slaves still managed to escape. In Brazil. escaped slaves formed communities in different places to try to defend themselves from bounty hunters together. They even created independent villages called ‘quilombos’. The most well-known one was Palmares, with almost 10,000 inhabitants. Many of these people were former slaves from Angola.

Since slaves were not allowed to fight, they practiced dance moves to Angolan rhythms and music. This way, they hid fight moves in their dancing. Capoeira was born. It not only taught them to defend themselves, but also created a sense of community and made it possible for African Brazilians to practice their culture.

Since capoeira was uniting slaves from different countries, religions, and cultures, the fight dance was seen as extremely dangerous by the Brazilian land owners. Capoeira, as well as all other African cultural practices, was banned.

The biggest proponent of capoeira was Mestre Bimba, who lived from 1900 to 1973. Thanks to his efforts, he was able to convince the Brazilian government that capoeira had become an important part of Brazil’s multicultural society. Capoeira was officially recognised as a national sport in Brazil in 1930. Capoeira is also becoming more popular in the Netherlands. Take a look:

Questions
4) Why were voodoo and capoeira important to enslaved Africans?
5) Fighting was forbidden for slaves. Give two reasons for this. One reason can be found in the text above, while the second might be found by putting yourself in the shoes of the slave owners.