Step 3: The Story of Olaudah Equiano 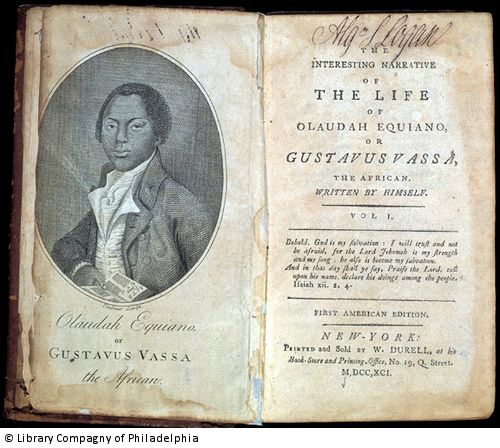 What was it like for a slave to cross the ocean on board of a slave ship and to be sold as a product in America? Not a lot of slaves would have been able to share their stories, but Olaudah Equiano did. When he was eleven years old, he was shipped from Nigeria to North America as a slave on a slave ship. Ten years later, he was able to buy his freedom, after which he dedicated his life to the resistance against slavery. He wrote down his experiences as a slave. These stories were also published as a book. The Dutch translation was published in 1790. In it, we can read about his arrival to the slave ship, the struggles on board, and how he was sold among all the other slaves in America.

The life of Olaudah Equiano
Olaudah Equiano was born in Isseke, Nigeria (Africa) in the year 1745. In 1756, he was captured and sold as a slave. He was taken to Virginia, North America, on a slave ship. There he was bought by a British naval officer in 1757. He also got a new name: Gustavus Vassa. He sailed to England and served in the British navy from 1758 to 1762. He was baptised in London in 1759. Equiano was sold in 1763.

He worked on trade ships sailing between the West Indies and the American mainland until 1766. In between his work as a slave, he also earned money for himself. He was finally able to buy his freedom with that money in 1766. The rest of his life was dedicated to protesting slavery. The book he wrote about his experiences as a slave is called Interesting Narrative of the Life of Olaudah Equiano or Gustavus Vassa, the African. It was published in 1789 and translated into Dutch in 1790. Equiano died in London in 1797, at the age of 52. 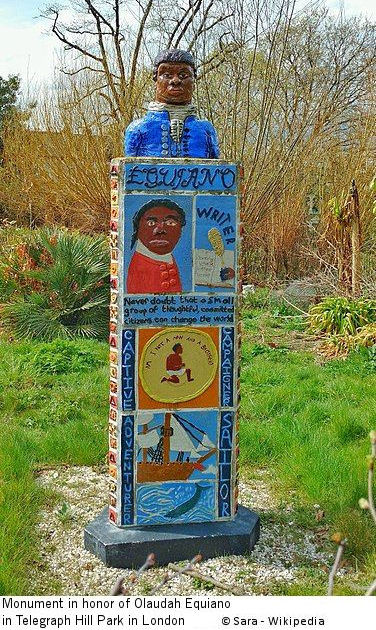 Bad spirits
In his book, Equiano wrote about the first time he saw the slave ship:

“The first object which saluted my eyes when I arrived on the coast was the sea, and a slave ship, which was then riding at anchor, and waiting for its cargo. These filled me with astonishment, which was soon converted into terror when I was carried on board. I was immediately handled and tossed up to see if I were sound by some of the crew; and I was now persuaded that I had gotten into a world of bad spirits, and that they were going to kill me.”

The crossing
Equiano wrote the following about the journey to the West Indies:

“The stench of the hold while we were on the coast was so intolerably loathsome, that it was dangerous to remain there for any time, and some of us had been permitted to stay on the deck for the fresh air (...).
The closeness of the place, and the heat of the climate, added to the number in the ship, which was so crowded that each had scarcely room to turn himself, almost suffocated us. This produced copious perspirations, so that the air soon became unfit for respiration (...).
[It] brought on a sickness among the slaves, of which many died, thus falling victims to the improvident avarice, as I may call it, of their purchasers. This wretched situation was again aggravated by the galling of the chains, now become insupportable; and the filth of the necessary tubs, into which the children often fell, and were almost suffocated. The shrieks of the women, and the groans of the dying, rendered the whole a scene of horror almost inconceivable.”

Merchandise
After he arrived in the West Indies, Oloudah Equiano was sold as a slave with many others. This is what he wrote about being sold:

“We were conducted immediately to the merchant's yard, where we were all pent up together like so many sheep in a fold, without regard to sex or age.
On a signal given, (as the beat of a drum) the buyers rush at once into the yard where the slaves are confined, and make choice of that parcel they like best. (...) In this manner, without scruple, are relations and friends separated, most of them never to see each other again.”

Question
3) Name three differences between the life of Olaudah Equiano and the lives of other enslaved Africans.