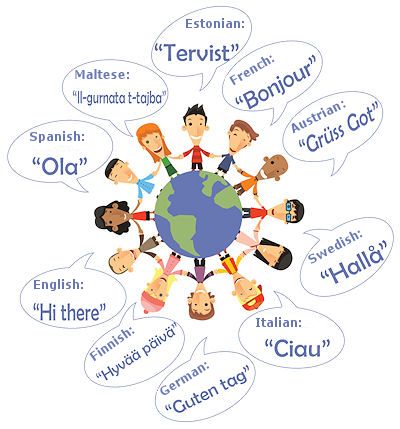 It is estimated that there are more than 6000 languages in the world; nobody knows exactly. It is assumed that they all originated from a common language. Through various events in history, languages have grown apart from each other and have become very diverse. Often languages blend into each other, just as colours blend into each other. In this sense, South African resembles Dutch, and Portuguese has developed from Spanish. Political fragmentation, colonial relations, social isolation, et cetera, are all reasons why languages have developed in their own way.

On top of these super-central languages there is a hyper-central language: English. English forms the centre of the world language system. Through English, almost all people around the world can communicate with each other. This is because Great Britain was once a great colonial power and left its language everywhere in that great British Empire. In many former colonies, English is still the main (official and administrative) language. In addition, the United States plays a major role. They are currently the leading nation worldwide. And the official language of the US is English.

Translation of the title: Primary school pupils receive English
Please note: the film is in Dutch; click here for a transcription in English.

Question
1) What do you think about English teaching in primary school from grade 1 onwards?