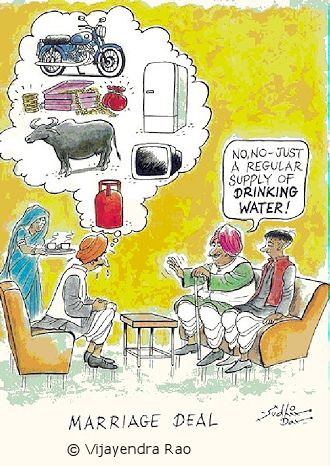 Femicide means to kill women or girls because of their gender. Of the five countries with the highest rates of femicide, four are in Latin America: Argentina, El Salvador, Honduras, and Mexico. The fifth is India. This top 5 is not a coincidence. There are two main causes of femicide.

India
Officially, families in India are not allowed to demand a dowry, but it still happens. Women are punished for having a daughter, and families trying to arrange a marriage for their daughter have to spend enormous amounts of money and buy gifts like refrigerators and televisions.

Once a woman becomes a wife, she is often treated poorly. For example, if the bride’s family cannot pay the dowry, the groom’s family takes out their anger on her. The Indian government registers that 8,000 new brides are killed in fights over the dowry every year. Needless to say, the real number is likely much higher.

This problem does not just lead to femicide, but also infanticide (the killing of babies). Some parents let their babies die if they are girls, because they cannot afford to pay a dowry.

Latin America
In Latin America, thousands of women die due to the violence that comes from macho culture. Men often see women as their property, that they can use for whatever they want. This sometimes results in men telling women what to wear and checking their phones. It often goes further than that, though, up to sexual abuse and murder.

Daiana Barrionuevo from Argentina was beaten to death by her boyfriend. Daiana had left him, because he was abusing her. Her three children, including the three year old Brisa, were left behind. The lobby group La Casa Del Encuentro (The Meeting House) turned Brisa into a symbol of all children who lost their parents through femicide. The lobby group made the government accept the “Brisa law” unanimously. This law means that children below the age of 18 whose mothers were murdered get $300 a year, as well as free access to medical and psychological care.

A positive change, but it does not solve the problem, says Amanda Klasing of Human Rights Watch. She thinks macho culture itself needs to change. “It starts in primary school with a good education. You have to teach children that it is not normal to touch women  or use violence. The authorities have to work harder to stop discrimination and punish men. Femicide is the ultimate expression of discrimination against women.”

Question
5) There is a lot of support for La Casa Del Encuentro, but also some criticism. Where could the criticism be coming from?