A child marriage is a marriage between a child and an adult or between two children. Child marriages are often forced and in most cases they are between an adult man and a girl. Globally, 1 in 5 girls are married before their 18th birthday. Many of them are no older than 12 and some girls are even forced to get married when they are 8 or even younger.

Causes
1. Poverty
Girls are often forced into arranged marriages when their parents are poor. It means one less mouth to feed. A dowry is cheaper for a girl who is young and uneducated. 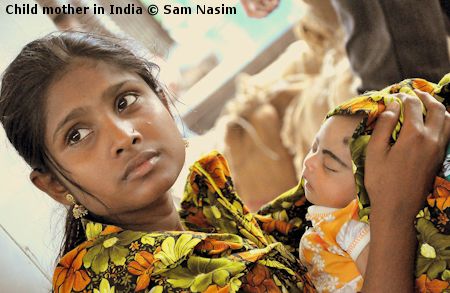 2. Discrimination
Girls are seen as worth less than boys in many places in the world. They are expected to get married, have children, and take care of their own home as soon as possible.

3. Culture and tradition
Marriage is a way for parents to guarantee a future for their daughters. For example, to protect her from rape and violence or to prevent the shame of sex and pregnancy before marriage.

4. Lack of education
For parents without an education, marriage may seem like the only chance at a better future. Girls who do go to school are three times less likely to end up in a child marriage. They are often more confident, know their rights, and are better at explaining to their parents why they do not want to get married yet.

5. Lack of laws
In almost half of all countries, child marriage is not against the law. Even countries that do have a minimum age of 18, do not always enforce that rule.

Consequences for girls
1. Quitting school early
Girls who are forced to get married, usually have to quit school. This means they cannot develop further and almost have no chance at finding a job.

3. Health problems
Child brides often get pregnant and have to give birth far too young. This comes with great health risks. Girls between 10 and 14 are up to five times as likely to die in childbirth than women between 20 and 24. Complications during pregnancy and during childbirth are one of the main causes of death for girls between 15 and 19 in low-wage countries.


Niger and Uganda
In Saudi Arabia, Djibouti, Sri Lanka, and Yemen, there is no minimum age for people to get married. In Nigeria, the minimum age is 15, but not everyone sticks to those rules. Niger is the country with the most child brides in the world: three quarters of all girls are married before they are 18 and almost always to an older man. 13-year-old Mariama talks about her marriage:

In Uganda, the minimum age to get married is 18, but that rule is also broken a lot in this country. Rose was in her final year of primary school and was 14. (This is not unusual in Uganda; if parents do not have money for school supplies, children sometimes stay home for a year before going back.) 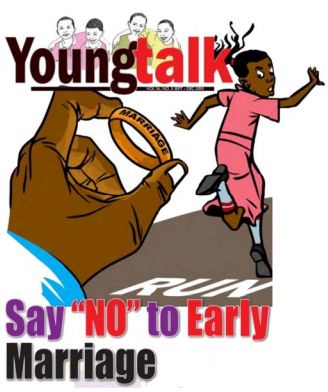 Rose became pregnant. Pregnant girls are not allowed to stay in school, so she was sent home. Her mother forced Rose to marry the neighbour who got her pregnant and Rose moved into his house. “Married life was hell. They made me do everything. Digging, taking care of the goats, cooking, getting water, collecting firewood, and finding food. I had to find vegetables every day and sometimes I had to go to Lake Bisinia to buy fish for a family of 11 people."

Young Talk
Young Talk is a free Ugandan magazine for children in the final years of primary school. In this magazine, all kinds of subjects are discussed: domestic violence, HIV/AIDS, incest, sex trafficking, and child marriage. In this magazine, children tell their stories, but experts also share their advice.

Mariam Akiror from Uganda Child Rights NGO Network tells the readers of the magazine: “Focus on education. An early marriage is usually not successful. Every child has dreams and you can reach them through education. If you feel forced to get married, tell a teacher, someone you trust, or a police officer. Girls are not property. Child marriage often leads to an early death, poverty, and illness. Find friends who want the best for you.”

Police officer Okwangor James also speaks directly to children reading the magazine: “A child marriage is a crime. If it happens, tell the police. Last year, two girls reported that their families were arranging a marriage. We went to their homes during the traditional wedding ceremony. We arrested the parents and the men who wanted to marry the girls."

Questions
1) Education is involved in both a cause and a solution for child marriages. Explain why.
2) What health problem not mentioned in the text do you think child brides often deal with too?
3) Imagine you are a child from Uganda. What advice would you want to give the readers of Uganda Talks?