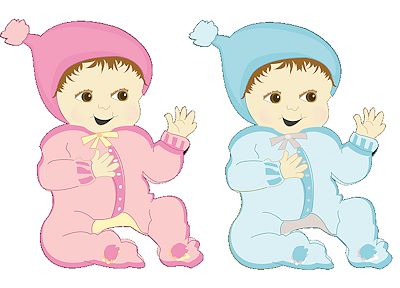 The picture on the left shows two babies. How can you tell if they are boys or girls? You can tell by the colours we associate with each sex. Since 1950, pink has been a colour for girls and blue for boys. These colours are used on birth announcement cards, the furniture and decorations in the baby’s room, coloured treats that the new parents serve to guests, clothes, toys, and even children’s bikes.

Funnily enough, it used to be the other way around. Pink used to be considered a masculine colour and blue a feminine colour. You can still see an example of this in statues of the Christian figure Maria, the mother of Jesus, who always wears a blue cloak.

We do not just connect masculinity and femininity to these colours, but also to certain kinds of behaviour. These are called stereotypes: generalised ideas about groups of people.

If a boy falls down, he often gets told to man up. A girl is more likely to be comfortable. Books and movies for children enhance stereotypes about girls and boys. The main character is often an adventurer, a hero, or a villain, and nine times out of ten they are a man or a boy. Change is coming, though, even if it is coming slowly. In old Disney movies (Snow White (1937), Cinderella (1950), Beauty and the Beast (1991)), the female main characters often get complimented on their beauty. Female main characters in later Disney films (Pocahontas (1995), Tangled (2010), Brave (2012)) get more compliments for their skills.

Children’s books show the same development. Characters like Pippi Longstocking were the exception for a long time. Even in the famous Dutch books by Annie M.G. Schmidt, Jip is much braver than Janneke. These days, there are a lot more tough girls in children’s books, partly because a lot more women have started writing children’s books.

Despite these changes, (many) parents of teens still have different expectations for their daughters compared to their sons. Can boys still be boys? That was the message of a SIRE campaign in 2017. The creators of this video wanted boys to get more space to roughhouse, because it helps them grow up healthy. The campaign faced a lot of criticism.

Translation of the title: Boys must be busy and tough
Please note: the film is in Dutch; click here for a transcription in English.

Question
1) How do you feel about the video? Is there such a thing as typical boy behaviour? What about typical girl behaviour? Can you give any examples?