Step 1: CO2 emissions from the Dutch

The people of the Netherlands emit a little less than 200 billion tons of CO2* every year. Dutch people are responsible for three times as much CO2 as the average person on the planet. The average Dutch person emits 10,110 kg or 10.11 tons of CO2 every year, while the world average is 3.4 tons of CO2. 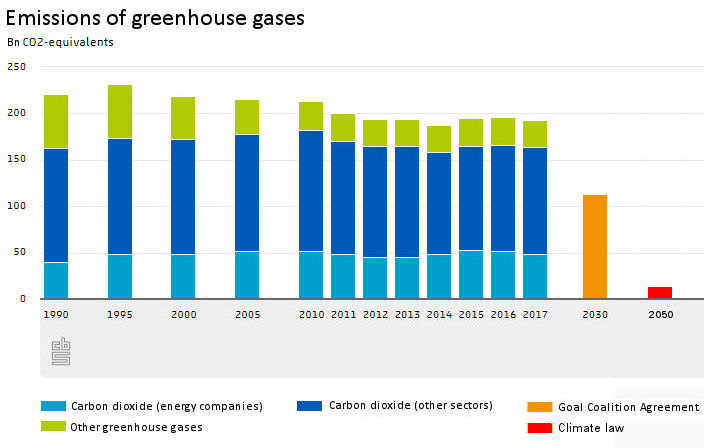 In 2018, the Netherlands was the first country in the world that turned their climate agreements into a law: the Climate Law. According to this law, emissions need to be 95% lower by 2050, which is a little less than 10 million tons of CO2 equivalents.

Since power plants started replacing coal with gas as their source of fuel, their greenhouse gas emissions have been decreasing. The household sector uses less gas to heat their homes, but people still use a lot of gasoline and diesel for transportation.

Question
1) According to the government agreement, CO2 emissions need to be decreased by 49% compared to 1990.
a) The reference point we have is 2017. At that point, emissions had decreased by 13% compared to 1990. How much did they decrease per year, on average, in this period?
b) When will we reach the goal of 49% if we continue at this pace?
c) How big should the yearly decrease be from now on if we want to reach this goal by 2030?